Welcome to the BMG Advisors Frequently Asked Questions (FAQs).  If you require more information, or if you are having problems locating an answer to a questions that you may have, please do not hesitate to contact us. Please note that ‘BMG Funds” refers to BMG BullionFund, BMG Gold BullionFund and BMG Silver BullionFund.

Where can I review the BMG Funds Documents?

You can review a copy of the Prospectus, the Annual Information Form and other documents in the Financial Reports, Filings & Forms section of our website.

Who do the BMG Funds use as their back office?

BMG Funds use RBC Investor Services Trust, for all their back office administration and reporting

Are BMG Funds protected in the event of insolvency?

If, for some reason, the BMG Funds were wound up, the assets would be sold and the proceeds distributed to unitholders after expenses of the BMG Funds were paid. None of the liabilities of BMS could be paid with these proceeds. The BMG Funds’ expenses might include trustee fees, accounting costs, storage cost and insurance. Unlike traditional liquidations, there would be no distress discount due to a forced liquidation of the bullion.  The precious metals would still be worth the prevailing spot price, thereby retaining their value to unitholders.

Because of the high degree of liquidity in precious metals, there is little risk of the BMG Funds losing value if there is an excess of redemptions or any risk of suspension of redemptions.  Precious metals trade 24 hours a day around the world and are as liquid as US dollars.

Who is the Canadian Investor Protection Fund (CIPF)?

CIPF Members are Dealer Members of the Investment Industry Regulatory Organization of Canada (IIROC). In the unlikely event that the Member you are dealing with becomes insolvent, CIPF will ensure the securities, cash and other property that are held in your account are returned to you in accordance with their Coverage Policy.

Are BMG Funds available through FundSERV?

Yes. The FundSERV Codes are:

Where can I obtain performance information?

Which dealers have approved BMG Funds?

Which RRSP trustees have approved BMG Funds for self-directed plans?

Apart from the trust companies associated with the major banks, BMG Funds have also been approved for sale by major trustees for self-directed plans such as MRS Trust and Royal Trust.

What is the compensation structure for financial advisors?

For Class A units, BMG Funds provide for front-end commission of up to 5 percent, and pays an ongoing service or trailer fee of 1 percent, paid monthly.

What is the average percentage an advisor may recommend for a diversified portfolio?

From a tactical allocation standpoint, Wainwright Economics looks to gold as being a leading indicator of future inflation. In a high inflation environment, which the ongoing currency creation around the world makes likely, their conclusion is that you require15 percent in a bond portfolio and the same percentage in an equity portfolio just to insure your investments against further inflationary damage.

The percentage mix is debatable; however, to protect your client’s portfolio and preserve your client’s wealth, a 5 to 20 percent allocation to precious metals is recommended.

What is the minimum investment to participate in BMG Funds?

The minimum investment is $1,000. Subsequent investments are $100, and systematic investments such as PACs must amount to a minimum of $25.

Is it possible to make regular monthly contributions?

Yes. This procedure can be set up through the back office at RBC Investor Services Trust, or through your RRSP/TFSA trustee.

DO BMG Fund units represent a specific bar of gold, silver or platinum?

A unit represents an undivided interest in the gold, silver, and platinum owned by the Funds. The minimum bar sizes are as follows:

How is the price of the units of the BMG Funds determined?

The prices paid for the metals are the ask prices. No one can buy at the spot price, be it the NYMEX close or the London PM Fix, in the same way that no one can buy at the last closing price in a stock. Based on this, comparing to spot is unrealistic. There is a bid/ask spread. The ask prices for each metal in a rising market are higher than spot, and lower than spot in a falling market. Here again, there is a differential between the NAV per unit that is based on the London PM Fix each day. This price does not necessarily represent the average price; it can be dramatically different from the high or the low for the day, and does not correspond to the actual prices paid by BMG Funds.

How do I set up myself and my associates to sell BMG Funds?

Have your head office personnel contact RBC Investor Services Trust at 1.866.241.6484 to obtain a dealer contract.

What is the track record of the BMG Funds management team?

BMG Funds management team has been in the investment business for a combined total of more than 100 years. Unlike most mutual funds, however, unit-holders are not relying on the expertise of the fund manager for BMG Fund performance.

BMG Funds have a fixed investment policy that, allows BMG Funds to purchase equal dollar amounts of each metal for BMG BullionFund, purchase gold for BMG Gold BullionFund and to purchase silver for BMG Silver BullionFund at the prevailing market or spot price on every regular business day. BMG Funds do not rely on anyone’s ability to perform, or to make decisions that would affect BMG Funds’ investment performances. In addition, by holding actual bullion, BMG Funds unit-holders are not relying on anyone’s promise of performance. BMG Funds hold physical bullion on an allocated and *insured basis.

*”Insured basis” refers to certain insurance covering the storage of the physical bullion with the BMG Funds’ Custodian, and does not refer to insurance related to a loss in market value of the underlying holdings.

How do I know that BMG Group Inc. secures socially responsible precious metals?

BMG Group Inc.  is an affiliate member of The London Bullion Market Association (LBMA) and only purchases ‘Good Delivery’ bars for its programs, ensuring all precious metals are SRI.

The LBMA Good Delivery List is now widely recognized as representing the de facto standard for the quality of gold and silver bars, in large part thanks to the stringent criteria for assaying standards and bar quality that an applicant must satisfy in order to be listed. The assaying capabilities of refiners on the Good Delivery List are periodically checked under the LBMA’s Proactive Monitoring program.

The London Bullion Market Association (LBMA) is the international trade association that represents the market for gold and silver bullion, which is centred in London, England but has a global client base, including the majority of the central banks that hold gold, private sector investors, mining companies, producers, refiners and fabricators. The current membership stands at 149 companies.

What is ‘Responsible Gold Guidance'?

The LBMA has set up a Responsible Gold Guidance for Good Delivery Refiners in order to combat systemic or wide-spread abuses of human rights, to avoid contributing to conflict, to comply with high standards of anti-money laundering, and to combat terrorist financing practices. This Guidance formalizes and consolidates existing high standards of due diligence among all LBMA Good Delivery Refiners.

How is gold superior to currencies or other liquid investments from an environmental, social and governance point of view?

Gold is often touted as a poor investment; advisors and the media alike warn investors to avoid it because they think gold is volatile, or because it doesn’t pay dividends. Treating gold as an investment, however, misses the point. Gold is neither a good investment nor a bad investment; gold is money.

Physical gold bullion or physical paper currencies locked in a vault are not invested; they are simply being stored. Since neither is invested, they don’t earn interest or dividends, but equally they don’t have any counterparty risk. The major difference between gold and currencies kept in a vault, however, is that gold’s purchasing power increases over time, while paper currencies’ purchasing power decreases over time.

Gold cannot be devalued by government deficit spending and the corresponding increase in the currency supply that is needed to keep the exponential curve moving.  Gold is not subject to devaluation by inflation; it is negatively correlated to inflation.  In fact, most banks, (especially central banks), view gold as a currency.  This is evidenced by the fact that most large banks trade gold as a currency, not as a commodity.

Why do we still value precious metals?

Gold is money, not a commodity as many investors and advisors incorrectly view it. Gold trades on the currency desks of the major banks and brokerage houses, not the commodity desks. It is a wealth-preserving asset, not a wealth-accumulating asset. We buy and hold gold bullion to preserve wealth. It is important to note that, while we may speculate in gold stocks, exchange-traded funds, futures and options to increase wealth, it is gold bullion ownership that best serves the purpose of wealth preservation.

What is meant by the term ‘honest money’?

Gold is often referred to as ‘honest money.’ For money to be considered honest it must be a store of value and it must provide a firm baseline for measuring the price of goods and services. Gold bullion has both those attributes; fiat currency has neither. Honest money retains its worth by virtue of its intrinsic value.  Paper currencies, or digits on a computer screen, have no value in and of themselves. They cannot be used for anything else.  The over-printing of bank notes backed only by faith dilutes paper currencies’ worth in a way that can never happen with gold. That is why gold and silver are called honest money.

Money must satisfy several functions. It must be: easily transportable; equally divisible; rare; durable; and a store of value.  Gold and silver can never become worthless.  Paper currencies come and go, but precious metals remain valuable.  Gold, silver and platinum are not created from thin air; they are not dependent on a fractional reserve system; they are not dependent on the solvency of an institution; they cannot be obtained easily; and they are the ultimate extinguisher of debt.

This Fast-Track Learning section of video and audio presentations is an easy way to gain knowledge about the precious metals industry and enable you to make well-informed decisions about diversifying your portfolio and maximizing wealth preservation.

Recommended Books to Build Your Business 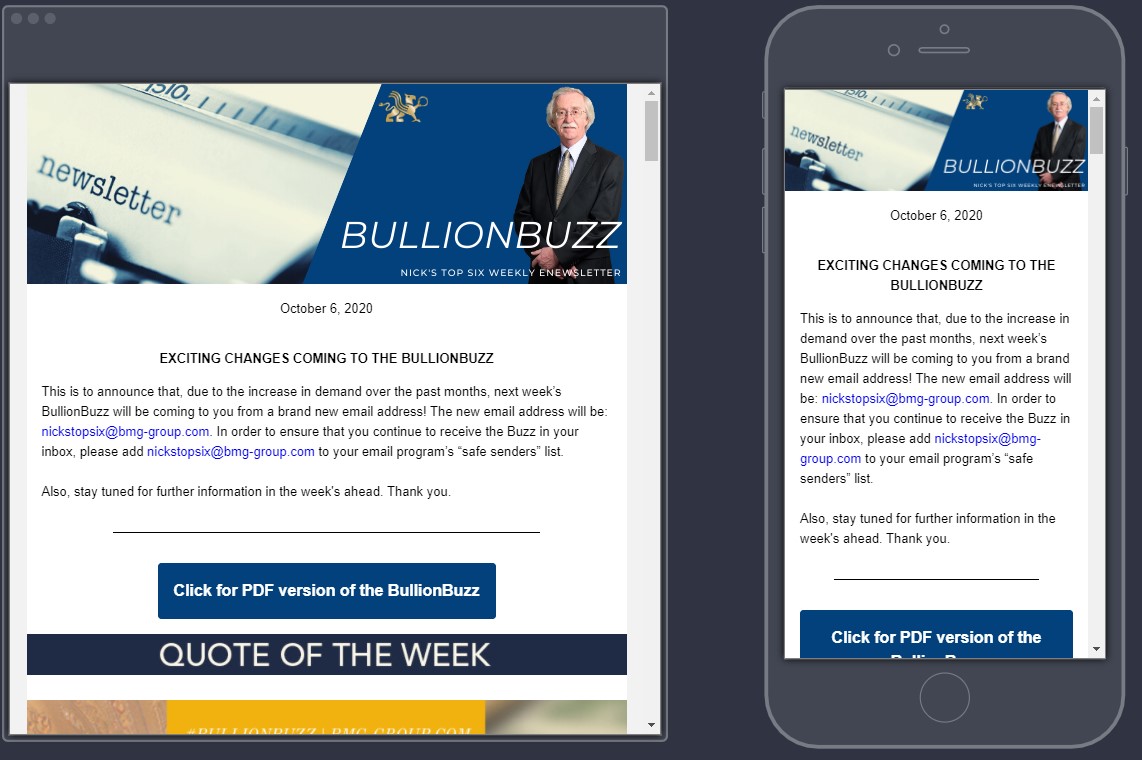